The brewery, located in Powell River, part of the Sunshine Coast Ale Trail, won the coveted award following an online nomination process throughout October and November.

“Chuffed is the word I would use,” responded Chloe Smith, general manager of Townsite Brewing when asked how it felt to win the award. “We certainly feel that we provide the whole package, in terms of great beer, plus great atmosphere. It feels good to know that someone else thinks that too!”

Townsite Brewing opened in 2012 in the Federal Building, an architectural treasure with beautiful art deco brickwork. Built in 1939, the building housed the post office and other federal agencies in the Townsite area of Powell River. Before the recent boom of craft breweries had really begun, the idea of opening a craft brewery in a remote town, two ferries from Vancouver, seemed risky, but Townsite was a hit with the local community from the start and has never looked back. A big part of the brewery’s success is the skill and approach of co-owner Cédric Dauchot, a Belgian-born-and- trained brewmaster. His wife, Chloe Smith, a brewer herself, is Townsite’s general manager.

Adding to its unique character, Townsite is the only designated Economusée brewery in B.C. This program aims to promote and conserve the heritage of traditional skills by showcasing artisans at work. Townsite’s public entrance and tasting room features exhibits and displays explaining the brewing process, along with details like how to pick the right glass for different beer styles, and a biography of Cédric Dauchot — all in both English and French.

The brewery’s popular lineup of beers and active involvement in the community has helped make its 16-tap tasting room a busy place filled with locals and visitors alike. Since 2012, Townsite has released more than 45 different beers and has won many awards, including two gold medals at the Canadian Brewing Awards for its Perfect Storm Stout (2016) and Blackberry Sour (2017).

“Townsite Brewing is one of my favourite places to visit on the BC Ale Trail,” says Joe Wiebe, Director of Content for the BC Ale Trail. “I love the tasting room, and I really admire the high standard of quality and creativity they put into all their beers. The brewery itself is well worth the trip to Powell River, which is such an interesting and welcoming community.”

Many of Townsite’s beers are named for local sites or popular activities, including Zunga Golden Ale (“zunga” is the local term for a rope swing over water), and Tin Hat IPA – which is named for a local mountain of the same name and is also logger slang for a hard hat. Other beer names have more of a personal story to them, such as the 7200 Saison, which marks the distance from Dauchot’s Belgian birthplace to Powell River (in kilometres) and Shiny Penny Belgian IPA, which commemorates the Shiny Penny brewpub Dauchot and Smith tried to open in Saskatoon before settling in B.C.

Townsite is also getting very well known for its “Bois Sauvages” beers, which translates into “wild wood” in English, a reference to both the wood-aging process as well as one of Powell River’s neighbourhoods, Wildwood.

The brewery’s tasting room is open daily from 11 a.m. to 9 p.m., and brewery tours are offered every Saturday at 3:00 p.m. or by special arrangement ahead of time. Ever since opening, $1 from every growler filled at Townsite goes to a local charity — an average of $9,000 in annual donations. 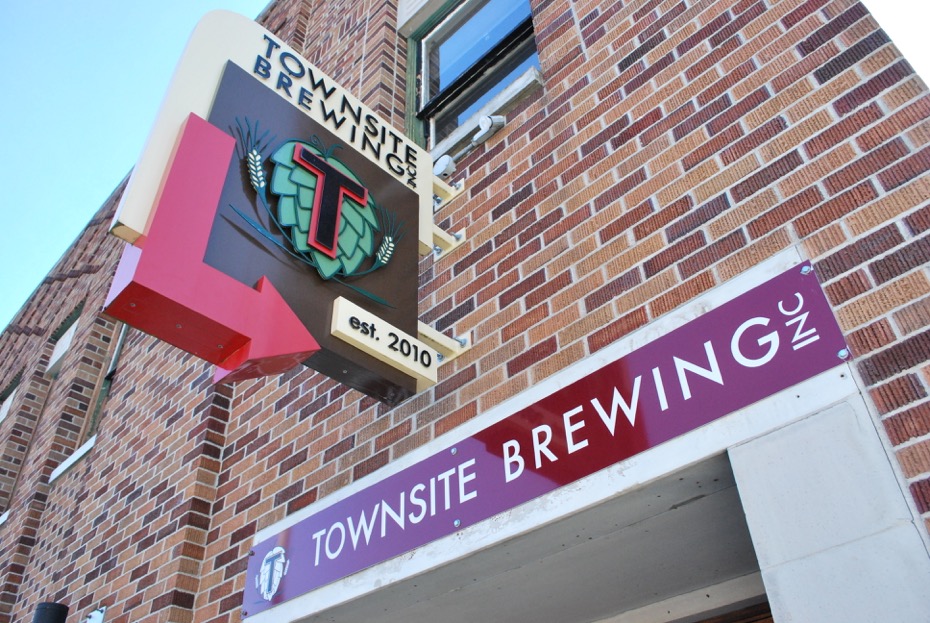