As the days get shorter and evenings colder, what would be better than a hand picked Fall selection of BC craft beers to keep your belly warm? This week, the BC Craft Brewers Guild is introducing the very best that BC has to offer for the cooler season with its Natural Selection twelve packs of cans and bottles. Featuring six different craft beers in each pack, the collection of brews will be on shelves across BC, showcasing the quality and diversity of the province’s best brews.

“We’re really excited to bring the Natural Selection packs to our craft beer lovers in BC,” says Ken Beattie Executive Director of the BC Craft Brewers Guild. “The craft beer market continues to grow in British Columbia, and we’ve selected these brews to truly showcase the incredible variety and quality of beers we’ve created for our consumers.”

About the Brews – Bottles

Whistler Chestnut Ale
This limited release is a true reflection of Fall. We’ve blended robust caramel and crystal malts to give the brew deep brown amber hues, for an almost warming appearance. But it’s the roasted chestnuts that impart a unique and bold nutty character, complemented by a light level of hops, for a clean but crisp finish.

Russell Blood Alley Bitter
At 50 IBU’s Blood Alley Bitter is slightly higher in bitterness than the average ESB but it is well-balanced by the rich, roasted malt flavours. Stylistically, the malt side is very English, but the hops are all floral US varieties. Brewed with 2-row Pilsner Malt, Flaked Barley, UK Crystal Malt, and a touch of UK Chocolate Malt. Columbus hops are used in the brew kettle, and dry hopped with Cascade and Willamette.

Lighthouse Switchback IPA
Lighthouse Switchback IPA uses a blend of the great ‘C’ hops – Cascade, Centennial, Columbus and Citra. In addition, they have added another Hop Union blend called Zythos. Both blends are used to impart a subtle dry-hop character to the beer. Late kettle additions of Amarillo and a secret Southern Hemisphere hop broaden the hop profile from the traditional citrus into the more contemporary stone-fruit and tropical fruit spectrum.

About the Brews – Cans

Howe Sound Lager
Howe Sound Lager is a version of the Dortmunder style. It is a pale golden lager, that is balanced between sweet malt and dry hop flavours. The lager has a clean, dry finish with some mild fruitiness delivered by the US version of German Hallertau hops and traditional Polish Lublin.

Naramata Nut Brown Ale
Fine bittering, aroma and flavour hops along with rich dark malts are layered in a seamless manner that results in a velvety soft ale with an amazingly smooth finish.

The Natural Selection Craft Packs are now available in BC Liquor Stores and Private stores across BC for $24.95! 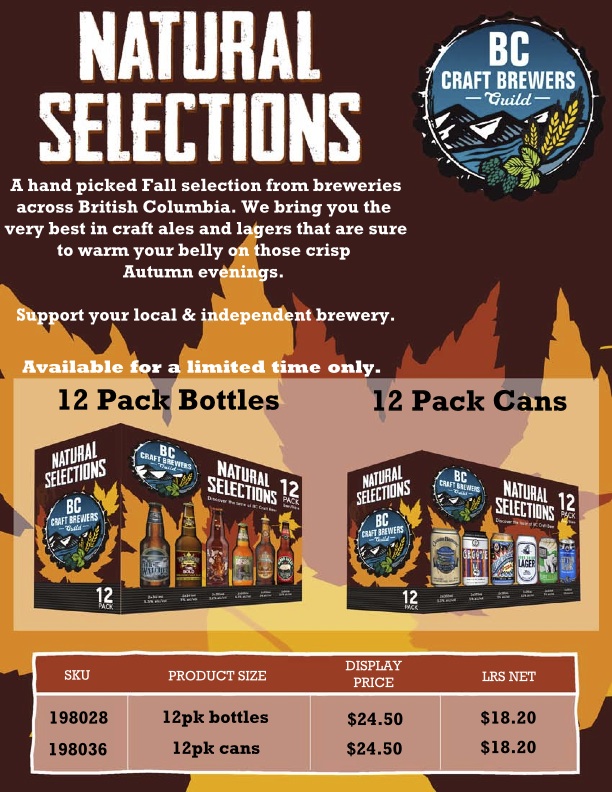